Not so fast OCC and CFPB 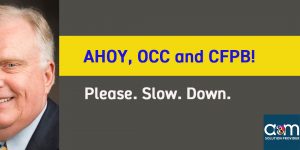 I’m a fan of innovation in the financial industry. God knows, it is needed.

However, I’m not a big fan of regulation.  God knows, there’s a lot that should be given the old heave-ho.

But, there are limits.  And, we’ve recently reached a big one.

That’s why I’m opposed to the Office of the Comptroller of the Currency (OCC) plan to fast-track the issuance of “special charters” giving successful applicants a free pass on violations of consumer protections in the bargain. For the same reason,

For similar reasons,  I protest the (Consumer Financial Protection Board (CFPB) plan, as written, for a “Disclosure Sandbox” which would allow the agency to issue waivers to applicants allowing them to conduct trial programs without violating existing rules. The OCC has been sued over this by the Conference of State Bank Supervisors (CSBS) and New York’s Department of Financial Services (DFS). Twenty-two state Attorneys General – including my own state of North Carolina—are objecting to the this proposal, citing concern about the unknown risks [to consumers] posed by emerging technologies and advocating for a cautious and deliberative approach. Kudos to all three groups!

Too many times consumer protections have been given short shrift by the financial industry, and their regulators, to the harm of consumers. Protecting consumers is what regulators exist to do.  No personal insults intended, but the evidence is clear: the 2008-2009 Financial Crisis can be laid squarely on the feet of gun-slinging innovators at money-center banks and their cooperative if not negligent regulators.

So, fast-tracking Fintech at the expense of consumer protection? Not a good idea.

← Mr. Banker, time to rethink hiring a book of business