My grandfather’s photo should have been in the dictionary beside the word “deliberate.”

by George Self | Advertising, Business At Its Best, Marketing 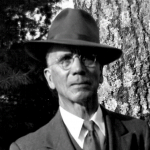 My grandfather, Harley Pettit, circa 1950

My grandfather (the non-Scots/Irish one) was a first-class carpenter.  According to family legend, he worked with his father on the construction of the Vanderbilt’s dairy barn at the Biltmore House, which would have been around 1901 or so.  Later, during the depression, he was a family-farmer who learned how to live on air and about ten acres of scrub pine and red clay.  He raised six children, and at least one grandson, retired debt free and had land left over to give to all his kids.

Part of his success was his “Measure Twice, Cut Once” way of looking at things.  He was an obsessive planner—when I was younger, I used to say “plodder” because he always, ALWAYS, mulled things over from every conceivable direction before he took any action—especially if the action held even a hint of a do-over.  He was so focused on making no move he had not analyzed two or three times,  honest to God, I used to tell my mother I was amazed he got his boots tied before noon. (Ironically, when I was 13, because of his arthritis, it became my morning chore to get his boots on and tied; reversing the process after supper.)

Why am I telling you this, you ask?

Because the philosophy of “measure twice, cut once” works for marketing people as well as carpenters.  For example, our company just finished a federally required mailing to customers of a company my client bought.  The mailing, which had a tight, federally required deadline, consisted of two large information and disclosure booklets, a letter from the boss and a couple of other odds and ends.  It also required some changes to both company’s websites.

Not unexpectedly, the project took several twists and turns, most of which added multiple revisions, all of which had to go back and forth, here and there, for approvals of one sort or another.  As you can imagine, the pressure was on to hurry and get it done since all those changes were mounting up, causing us to bump the deadline pretty hard.  After every delay, especially those that unexpectedly arose on the weekend, it was overwhelmingly tempting to forget my grandfather’s principles and go with “forget measuring twice, just cut the damn thing”.

And this comes up now because my company is about to celebrate its 45th anniversary.

I think one of the reasons we are looking at our company’s 45th anniversary of continuous operations is my grandfather’s hard-held creed, passed on indelibly to me.  As a company, we’re true believers.  Measuring twice is in our DNA.  We’d rather work late, in the evening or on weekends, than have a “do-over,” caused by failing to measure twice before we cut.  That doesn’t mean we haven’t made mistakes.  But we rarely screw up because we failed to measure twice.

I believe that attitude helps us get and keep customers.  When it’s their money on the line, clients know we’ll measure twice before we commit to anything. And even though my clients have never seen my grandfather’s picture in the dictionary,  they value his philosophy: measure twice (or as many times as it takes)  before the saw blade renders a final judgment.

← Community banks need a slingshot. They already have the stones. Turning the Right Screw →